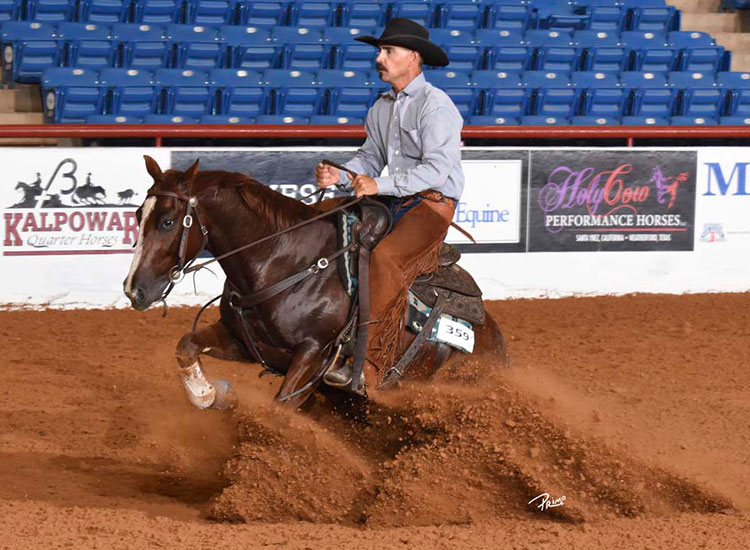 Smart Shiney Playboy almost didn’t get to go to the Reno Snaffle Bit Futurity. Good thing Nick Dowers decided to go with his gut and bring the gelding along to “The Biggest Little City in the World.”

The question was whether Clinton Marshall’s son of WR This Cats Smart would benefit from another show on the heels of his effort in last month’s National Stock Horse Association Futurity in Las Vegas.

In Vegas, Smart Shiney Playboy had a bobble in the herd work and Dowers said he “just kind of cruised him through” the rest of the show. The ultimate goal is showing in next month’s National Reined Cow Horse Association (NRCHA) Snaffle Bit Futurity, so trainer and owner wanted to pick the strategy best for the horse.

“I actually called him before Reno and I was like, ‘Man, I really don’t’ know what to do. Should we show him? Should we not?’,” recalled Dowers, who said Marshall told him to follow his gut instinct. “And, he’s like, ‘What do you think?’ And we were back and forth. And, then we ultimately decided to show him and it worked out.”

Dowers, of Dyer, Nevada, was especially proud of how Smart Shiney Playboy performed down the fence in Reno. Their 225 was the highest score of the cow work, and required the sorrel blaze-faced gelding to get up close and personal with a cow — which Dowers said the horse hasn’t always been comfortable doing.

“He’s been scared of cattle and it’s literally been until the last couple weeks where I can bump and really push on a cow,” he explained. “And, it come down to tonight in the fence work — that cow really pushed on him, and he handled it like a rock star. And, that wasn’t the case even a few weeks ago.”

Smart Shiney Playboy is one of six money-earning performers out of his dam, Sinful Playgirl. Before Reno, the 1996 daughter of Freckles Playboy’s Equi-Stat produce record was led by two full siblings to the Reno Snaffle Bit Futurity Open Champion, Sinful Cat ($106,602, by WR This Cats Smart) and This Cats Sinful ($36,746, by WR This Cats Smart).