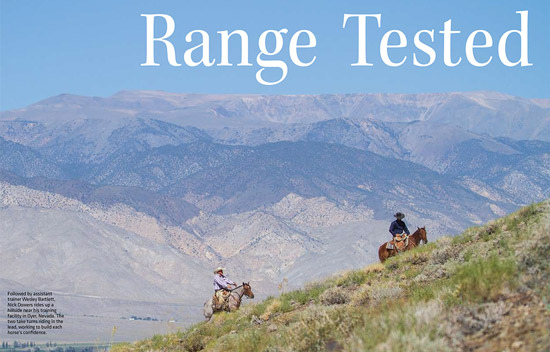 Riding a 3-year-old cow horse prospect, Nick Dowers drives a herd of black yearling calves into an open meadow. Putting the group together by himself, pointing them north and moving them across a new irrigation ditch requires plenty of riding, with his horse trotting, stopping, rolling back, and sometimes loping off to turn a wayward calf back into the herd.

The moves his horse makes are similar to the maneuvers it will execute in the show ring, and Dowers believes the practical application will make the horse a more consistent performer.

As the yearlings line out and plod along, Dowers could settle in behind and keep the herd rolling forward with little effort. But he can’t help but see opportunities to train his horse.

“Just because I’m cowboying doesn’t mean that I’m on a loose rein, just walking around all day,” he says. “My focus is to get the job done in an effective manner, but also to use that job to get my horse broke. I’m going to work on things that I know I’ll need in the arena. I’m constantly meshing the two.

“For example, I love getting my [2-year-olds] prepped for a lead change while moving cattle. I’ve got the pull of the cattle drawing my horse forward, so I start moving my horse’s hips and shoulders. That’s the best time because I’ve already got forward motion. In the arena it’s so much harder, especially on a young horse, to keep the motion and direct it, too.”

Dowers spends plenty of time working his horses on soft, flat, arena dirt. But he frequently rides outside on all of his horses, from 2-year-olds to seasoned show horses. Whether trailing cattle or trotting through the rocks and cacti surrounding his training facility in Dyer, Nevada, he constantly hunts for ways to enhance the training of his reined cow horses.

Drills in the Ditch

About half a mile from his arena and stalls, Dowers trots a young horse up and down an irrigation ditch. He directs the horse along the bottom of it, where the ground is wide and flat. But the horse gravitates toward the stalls and begins moving along the bank of the ditch. Dowers uses this opportunity to teach straightness.

“If the barn is to my right, I’ll set it up to where he has to work up the side hill if he wants to lean to the right,” he says. “I offer the bottom of the ditch as the easy deal. If he takes that, great. If he chooses to go along the side of the hill, then more power to him. It’s pretty smooth and level on the bottom, and on the hillside he’s got to negotiate the rocks, and [the uneven ground] requires more work.”

Dowers says most horses quickly learn to stay between his reins and legs.

“It usually doesn’t take too long because this sets it up in a way that the horse is wanting to change,” Dowers says. “It becomes his idea. So he might make this mistake [of leaning] two or three times, maybe four, and then figure out that, ‘The bottom of the ditch is good enough for me.’ ”

Once the horse learns to travel straight down the bottom of the ditch, Dowers rewards the horse with a break.

He also uses the bank to teach rollbacks. Moving again along the bottom, he stops and then asks the horse to make a 180-degree turn toward the bank. Ideally, it rocks onto its hindquarters, bends its neck and frame, makes a tight turn without crawling up the bank, and steps out following the tracks it just left. If it decides to leak forward and make a sloppy turn, it has to work uphill.

“If he is inclined to not follow my hands and roll forward, he could,” Dowers says. “But the environment tells him not to. It’s more work to turn uphill than follow my hand. He’s going to learn pretty fast that that’s not the right option.

“That’s how I try to set up every- thing; so the horse has an option. I don’t want to do the thinking for him, but the quicker his option aligns with what I’m wanting, the better it’s going to be for him.”

Dowers also likes to train while riding through rocks and sagebrush. By weaving through such obstacles, the horse becomes more in tune to the rider’s legs, seat and reins. By trotting small circles around a bush, it has to lift its back, bend its frame and work off its hind legs.

“I like doing it at a trot because I can feel the mistakes more,” Dowers says. “He’ll lean in more or lean out more at a trot. I’m looking for him to be more fluid as he goes around and hold his shape. All of the spots where he leans are the same spots where he’s going to lean during a turnaround [in a reining pattern]. So it helps me see what I’ve got—if I have him soft enough [through his frame] and in my hands.

“Then I start upping the ante. I turn him [180 degrees] toward the bush, then make a full turn away from the bush. I’m testing how well he’s going to follow my hands and stay balanced.

“I’m riding him where I want him to go, and if he chooses to lean and get tangled in the bush, more power to him.”

Sagebrush, or any other obstacle on the range, can also be used to improve a horse’s stop. Just as reining horse trainers ride toward a fence, Dowers trots toward a bush, tree or cactus, and just before getting there he sits deep and releases leg pressure. He doesn’t pull the reins, but lets his seat and the obstacle convince the horse to hit the brakes.

“My focus in everything is to get our thoughts aligned,” Dowers says. “If they aren’t, he’s going to cause himself more work. But when our thoughts align, instantly it becomes smooth sailing. It doesn’t take long and there’s no place he’d rather be than with me. That’s what I’m after.”

Backing up a small hill is another outside exercise that Dowers values.

“You might think you have a horse backing up good in the arena,” he says. “But if you go outside and back him up a hill, he’ll show you that it’s not as good as you thought. He might struggle there.”

The horse may root out its nose or veer right or left. But to accomplish the task the horse must tuck its nose, dig in with its hindquarters and move backward evenly. Dowers adds that backing uphill also enhances a horse’s sliding stop.

“I like backing horses up a hill, especially if it’s a little sandy,” he says. “The horse has to work and really engage his hindquarters. I think to create the perfect sliding stop, your horse has to be square and straight. So the hill is a good diagnostic to see what you need to work on.”

One of Dowers’ favorite exercises is for he and an assistant to ride two young horses out in the open. The two take turns riding in the lead, each time moving a little farther apart. The goal is to make each horse less dependent on its buddy and more in tune with the rider.

“We’ll go out, and I’ll trot ahead however far I can until my horse is out of his comfort zone,” Dowers says. “That might be 20 yards and it might be 100. And about the time my horse is getting on the edge of that bubble, or the other horse gets to the edge and feels like he needs to catch up, I slow down and start walking.”

Sooner or later, the other horse will want to catch up, so Dowers’ assistant asks it to speed up but then continues trotting past Dowers and takes the lead. They repeat the process over and over, expanding the two horses’ comfort zones each time.

“At first, when the other horse gets by me, my horse will want to keep up,” Dowers says. “But I’ll just do what I can for awhile to keep him at a walk. Eventually I’ll let him trot to catch up, but then I’ll keep trotting ahead to the edge of that bubble. So you build his confidence one horse length at a time, and pretty quick you can flat leave the other horse and it doesn’t matter. He’ll just bebop up the trail because he knows he’s not getting thrown off the deep end.”

This switching leaders exercise may not involve an advanced maneuver specific to reined cow horse competition, but Dowers says it still prepares the horse for the show ring.

“This is something that anyone can apply with their friend to help them get with their horse,” he says. “It works for a trail rider, but at the same time I do it with my performance horses. When the [arena] gate shuts and I’m the only one in there, if my horse isn’t confident being by himself, what do I have? How is he going to execute a pattern?”

Building confidence is one of Dowers’ key components to preparing cow horse prospects for the show pen. He attains that by riding and using his horses outside of the arena whenever he can. Roping and doctoring yearlings teaches a horse to track a cow and get in position so Dowers can rope it. That translates to circling a cow in reined cow horse events.

Packing gear into the mountains for one of Dowers’ hunting trips instills a blue-collar work ethic. Dragging calves to the branding fire exposes a horse to a wide array of sights, sounds and smells. Sorting cattle in an alley sharpens a horse’s cow sense and gives Dowers a chance to work on neck reining and shoulder and hip control in tight spaces.

Essentially, after a horse has been given numerous jobs and performs them in all kinds of environments, stepping into a show pen is not so intimidating.

“Why does everyone want to buy an old ranch gelding?” Dowers asks. “It’s because he’s been exposed to a hat flying off, to everything that goes on at a branding, to so much more. And he has learned to cope with it and doesn’t get scared.

“Performance horses can be taught the same, where they develop a confidence. It’s hard to develop confidence when you ride him for a short period of time in the arena every day. At least it’s hard for me to do that.

“You definitely have to spend time in the arena. There’s no way around that. But there are times you can fit other stuff in and mesh it all together.”

Story and photography by Ross Hecox